Around 120 schoolchildren from IGS Roderbruch and the Albert Einstein School in Laatzen talked to Doris Schröder-Köpf, Member of the Lower Saxony Parliament and Regional Commissioner for Migration and Social Inclusion, about opportunities and challenges for young people in Europe at the pilot Europe Live event. The schoolchildren showed her two videos they had produced themselves featuring their personal questions to Europe on issues such as the current situation in Greece.

The event was hosted by TV journalist Till Nassif (who presents the ARD’s Morgenmagazin), who compared the evening with humour and expertise.

I focused on the European Union’s financial situation – especially the financial troubles and needs of Greece. I also believe for many reasons that it is important for Greece to survive – including the reason, for me personally, that it’s a holiday destination.

Doris Schröder-Köpf, who has worked in Germany and New York as a journalist, experienced Europe from a different perspective at Chancellor Schröder’s side in the Federal Chancellery, and today has political responsibilities of her own, emphasised how crucial the young generation is to Europe’s development in her speech.

In the following debate, one of the key discussion topics was the EU’s refugee policy. How can refugees be given better education opportunities in Europe? How can we protect their rights and facilitate their integration in the Member States? This dynamic and direct event allowed all participants to get involved in open and focused dialogue and examine constructive solutions.

Doris Schröder-Köpf, EU refugee policy expert, made a number of proposals – one of these being to integrate refugees into the German labour market more quickly to counteract the shortage of skilled labour. 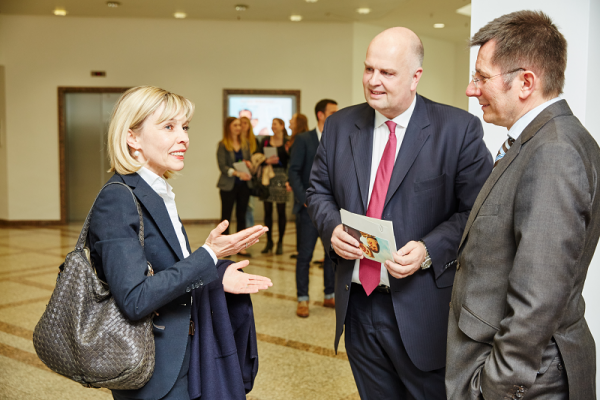 If you believe in Europe, you have to commit to improving it, address its problems and contribute to solving them. Above all, this is something that the younger generation should get involved in.

Thomas Ellerbeck, Chairman of the TUI Foundation’s Board of Trustees summarised: “It’s time to pool our resources for a stronger Europe – for democracy, freedom, diversity, tolerance and understanding. We have to focus on the opportunities for the European Union and the younger generation’s enthusiasm for a united Europe. We took the first step in that direction this evening.”

Now that the “Europe Live!” project has got off to a successful start, another school will be joining it in January 2016.