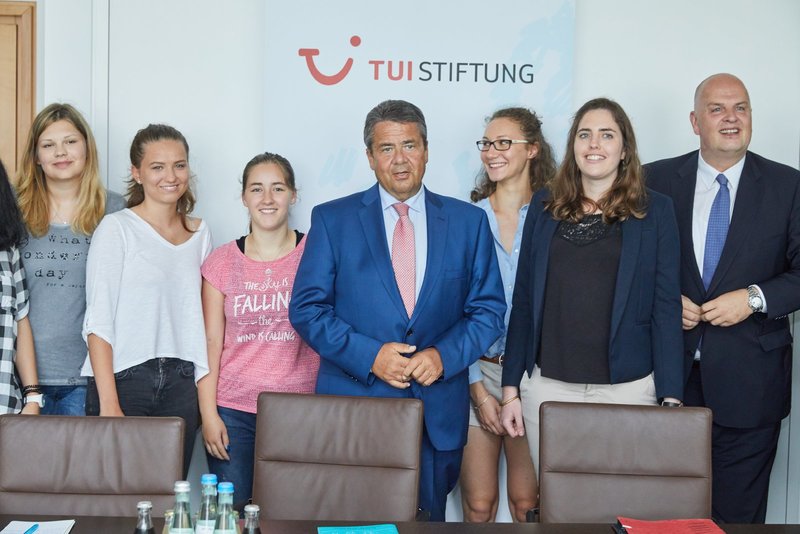 Federal Foreign Minister Sigmar Gabriel yesterday discussed Europe with young people. Students from the IGS Roderbruch comprehensive school in Hanover and trainees from TUI took part in the exchange. The question was what Europe can do differently in order to gain more acceptance among young people. The occasion was the TUI Foundation’s youth study, which was published in May.

In the discussion, Federal Foreign Minister Gabriel said: “The TUI Foundation’s study reflects the different lifestyles of young Europeans. For some, Europe offers opportunities, for others it does not. That is the problem”. With regard to the future of Europe, he stressed: “We live in a world that is changing radically. If young Europeans want to be heard in this world, they will only succeed in the future with the common voice of Europe”.

Katharina Richter is one of the young people who discussed with the Federal Foreign Minister. She is a trainee at TUI Deutschland and worked in Spain for four weeks as part of her training. During the discussion, she said: “To get to know Europe, you have to experience Europe! Christoffer Wickberg from Sweden thinks similarly. He is a trainee in the international graduate programme of the TUI Group and sees responsibility in politics: “The goal of politics must be that young citizens experience Europe at least once through a longer stay abroad”.

In May, the TUI Foundation published its youth study “Young Europe”, which examined young people’s attitudes towards Europe. The sometimes surprising results showed that there was only fragile agreement with Europe among the 16 to 26 year-olds surveyed. Most young Europeans see the EU as an economic area and not as a community of values. Overall, only a small majority of them regard democracy as the best form of government. More than a third wants the EU to return power to national governments.

Thomas Ellerbeck, Chairman of the Board of Trustees of the TUI Foundation, says: “The TUI Foundation’s youth study has shown that we need to explain Europe’s uniqueness more strongly to young people. Europe is more than free travel and a common currency. As the TUI Foundation, we want to promote this with our projects. We are particularly pleased that Federal Foreign Minister Sigmar Gabriel took the time today to engage in dialogue with young Europeans. To arouse enthusiasm for Europe and to discuss the challenges of our continent openly with the young generation is a common task for politics, civil society and business”.

Here you can see a report on the event:

In order to better understand the lives, identity(s) and attitudes of young Europeans towards Europe in 2017, the TUI Foundation commissioned the international opinion research institute YouGov to survey young people in France, Germany, Greece, Italy, Poland, Spain and the UK. From 16 February to 3 March 2017, a total of 6,000 young people aged 16 to 26 were interviewed online. The results were presented at the Federal Press Conference in Berlin on 4 May.

All results of the study as well as a summary with the most important numbers.