German MP Michael Roth, who is Minister for Europe at the Federal Foreign Office, was at Hamburg City Hall on 8 April 2016 to discuss current issues and their impact on Europe’s future with the 150 young people who attended the event. 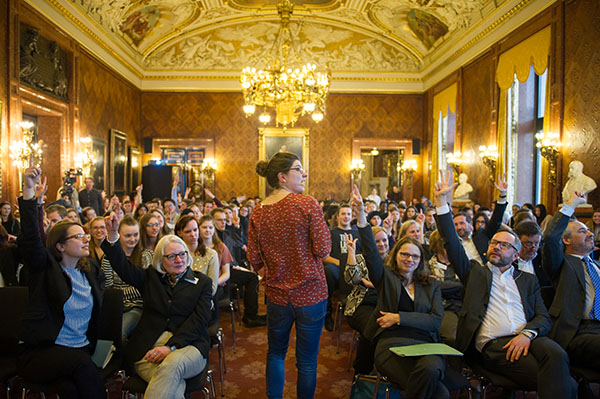 The subjects that the schoolchildren discussed with the minister included the possibility of a Brexit, the migrant crisis, terrorism in Europe and anti-European right-wing populism. Michael Roth and his young audience were both concerned about the lack of cohesion and solidarity in the EU and the potential consequences for Europe.

Despite all the problems, we can’t just stick our heads in the sand and look for simple answers – which is what the right-wing populist parties are doing,

At the end of the event, Michael Roth urged the young people to honour the name of Understanding Europe project by getting actively involved.

Europe urgently needs active citizen participation involving people like you. By all means be critical about Europe, but do get involved in the European processes and always make sure your criticisms are constructive.

Lena Prötzel, Programme Manager at the Schwarzkopf Foundation, said, “The questions asked by the young people about Europe at our workshops are a very exciting starting point because many of them address the central value conflicts in European politics. We need a more expansive framework to answer the question of how we want to live in Europe. That’s also one of the reasons why we’ll be offering a more in-depth ‘Asylum and Refugee Policy’ module to schools in Hamburg from autumn onwards.”

We hope that our compact EU workshops will communicate a basic understanding of European politics to young people in an interactive way and empower them to get involved in Europe.

Discussion with Michael Roth, Minister of State for Europe in the Federal Foreign Office

Project starts in Spain and the Netherlands

Getting started in Hamburg