Media
Start / Our projects / Young Europe: A New Future? / 900 churches and us: Rome and Naples

Our first stop in Southern Europe was Rome. The city with over 900 churches and a countless number of historical monuments left us with much to see and learn from. As we explored the city, we got lost in the many pebbled side streets of Rome, and Deborah. The 28-year-old views the EU as a source of hope for betterment, however she does not feel that young people in Italy are engaged enough in politics. In her view there is a general level of widespread apathy amongst young people in Italy which has its roots in their own national politics.

Aside from political turmoil Deborah told us that it was hard to find a job in Italy even if you have a university degree. She feels that young people are either pushed to further study or to move abroad. “Here [in Italy], you either need a Master’s degree with relevant work experience or a personal contact somewhere – networking is everything”.

This harsh reality was further revealed to us when we travelled South to Naples. Italy has to fight the ongoing stereotype of a rich North and poor South, one that we found to be true in the case of Naples. Even though the train journey was only an hour away from Rome, the dramatic differences in infrastructure and the surrounding suburbs were evident.

Once there, we got the opportunity to speak with Orry van de Wauwer, Belgian MP from the Christian Democrat Party. Orry explained to us the difficulties of achieving better representation for the citizens of the EU, the lengthy policy process and his proposal to improving it. He argued that as it stands, the EU consists of individuals in pursuit of their own national interests. However, reform to the Commission could alter this to make it a more collective entity that would look out for the interests of all – it was encouraging to hear that. Orry has done a lot of work for the integration of ethnic minorities in Belgium and as a young person himself, he recognises the importance of protecting our shared values of representation and inclusion. 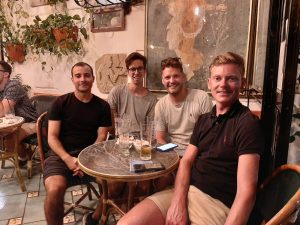 From left to right: Onur, Bosse, Orry and Steve

Italy reinforced some of our previous findings in other countries. We began to recognise a pattern of collective beliefs held against the EU but also that each country has its own unique set of problems. It was clear to us from our discussions that Italy has been struggling with problems similar to those in other Southern European countries – such as youth unemployment, brain drain and more recently far-right populism.

We were interested to compare our observations here with those that we would find in Athens and Marseille.