Athens was the southernmost point of our #engageEUrope2019 trip. Besides our political discussions we enjoyed exploring the cultural heritage of Athens. The Acropolis offered us a magnificent view of the city that was worth the climb! For Bosse as a history student, the historical monuments were an absolute highlight. Also the culinary highlights could not be missing. Our friends from Piraeus, a harbour southwest of Athens, spoiled us with traditional souvlaki from a local restaurant and delicious Greek watermelon for dessert. 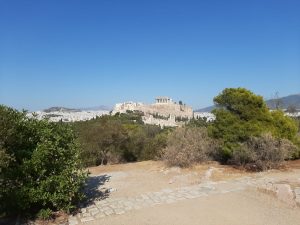 “A general feeling of mistrust is widespread in Greece,” Ori (33), a TUI employee with a background in civil engineering, told us. He was a participant in our roundtable discussion, which even made it into the Greek press! Anastos expressed a new insight for us. The 26-year-old TUI employee from Mykonos argued that Greece does not suffer from a generation conflict, but from a cultural conflict.

Trust in the EU is reticent among young and old Greek women*. Damaged by historical and cultural conflicts, the reluctance is reinforced by the negative consequences of the 2008 financial crisis. Almost half a million Greek graduates have since been forced to leave the country in search of better opportunities and financial security.

We spoke with the brothers Lefteris (24) and Antonis (25), both graduates of the University of Piraeus. They stressed that the broken promises of the Syriza Party had driven people even further away from the EU. Their failure in the negotiations with the EU after 2015 had led to a revival of the centre-right New Democracy (ND) party in the last elections. Eirini (27) claims that much of the Greek rhetoric during Syriza’s short-lived triumph was driven by emotion. People believed in Syriza and were disappointed. Since then she has been of the opinion that politicians have made the EU a scapegoat to take personal advantage of. Whenever it suits them, the EU is to blame – it is a political instrument, not a lead institution.

Some of the persons we talked to have the feeling that the European discussion is dominated by “giants”. The interests of the population are being dismissed. Olga (23), a recent graduate from Athens, calls for better representation.

Our time in Athens was short, but revealing. We got the opportunity to learn from young people from the heart of the Mediterranean and observe their culture in comparison to our own. Despite the problems, we could see that young Greek women* are optimistic. They believe in building a bridge to the EU and still feel attached to the values it stands for.

As our next stop in Marseille in southern France, we decided to take up the ambivalence between Macron as leader in the process of a stronger Europe and the frustration and disappointment of the French youth towards his government.