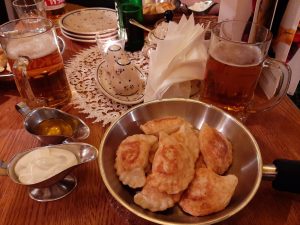 While we were organising our travel itinerary, Poland was of particular interest to us. Being a relatively new member, we were looking forward to the attitudes towards the EU we would encounter there. We expected to find a contrast between them and those we gathered prior in Western Europe.

Central-Eastern Europe is often stigmatised as being economically inferior. However, both Warsaw and Krakow offered a more than promising sight. Since its inclusion in 2004, Poland has profited from the EU substantially and experienced a golden age of economic growth. To say we were pleasantly surprised would be an understatement. Both cities had impressively efficient bus services and infrastructure that attracted many tourists.

Warsaw is a very modern and clean city that encourages one to walk through its busy centre. Nearly completely destroyed during the Second World War the city had to be rebuilt. One special building from this time is the Palace of Culture and Science which stands in the city centre as one of the tallest buildings in Poland as well as on the entire European Continent – a concurrent symbol of the past and future. Aside from exploration walks, we got a chance to listen to a Chopin concert and eat traditional Polish pierogi.

In opposition to Warsaw stands Krakow. Mostly untouched from the bombs of the Second World War it kept much of its medieval architecture. Around the city runs a 3km defensive wall and many of the 46 medieval towers are still intact. We thoroughly enjoyed cycling around Krakow and seeing all its points of culture. A highlight was the famous St. Mary’s Trumpet Call (Polish: Hejnał mariacki ) – a five note Polish anthem played hourly at the top of the central church tower as a symbol of the city’s historical lore.

We also got the chance to meet and talk with young people across the two cities. Beatia (21), a student at Warsaw University studying Trade Policy, expressed her concerns against the ruling Law and Justice (PiS) party: “They are violating the rule of law in subtle ways.”

In Krakow we met Veronica (22), a Psychology student at Jagiellonian University in Krakow, who feels the undemocratic tendencies of the government put the principles of all of Europe at risk. She emphasised that because of domestic disapproval, many young people have turned to Europe as a source of optimism. She feels proud to be European and to belong to a bigger entity than that of her national borders. For her the EU is an opportunity for her to live and work for higher salaries. An opportunity for her, but a problem for the country: Poland suffers from brain drain. 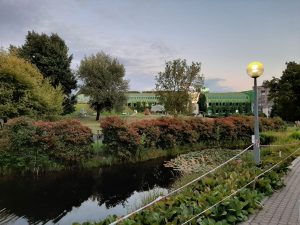 A phenomenon more typically associated with Southern Europe as Onur experienced himself, having travelled around Southern Europe last year. Free movement has meant that young and educated Poles are chasing higher salaries and financial stability elsewhere in Europe. In 2017, more than half a million educated Poles lived in another EU country. Especially the United Kingdom has attracted Poles, with Polish being the second largest spoken language there.

All in all, we really enjoyed our week in Poland, but it was clear that the government need to do more to make it a more attractive place to stay for young people. Having travelled down from Sweden, Poland was a reminder that not all countries in the EU are on the same level of development.