After our week in Poland, we took the train en route to Prague. The six hour journey served as an opportunity to discuss our observations from Poland, to reflect on the trip thus far and to prepare our talks for the Czech Republic. The discussions there should turn out to be more political than before.

We met Barbara, a 19 year old native Czech who hopes to study her Bachelors in London. She explained to us that the ruling ANO party won the election on a campaign based on anti-corruption and Euroscepticism. She feels the political scene in her own country as it stands is one of the reasons she wants to move abroad ‘closer to Europe’. Barbara feels her interests as a young person are better catered for on the European level than by her own country.

We visited Prague’s Old Town Square, site of the country’s historical protest against the Nazi occupation and later the 1989 Communist Regime. There we met Nicolo, a PhD graduate in Literature. 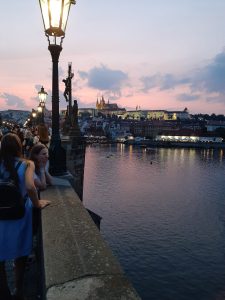 He told us that the Czech Republic is currently confronted with many domestic conflicts. Only recently, tens of thousands of Czech citizens from all over the country had gathered on the square to demand the resignation of Prime Minister Andrej Babis!

In between the discussions we fortunately had enough time to explore Prague. The beautiful city on the river Moldova has a lot to offer. In many places you can admire churches in Gothic style, framed by well-preserved architecture from different centuries. From above the whole thing is even more spectacular as we found out for ourselves on top of the Prague Castle. The magnificent panoramic views are best enjoyed with famous Czech beer and traditional Trdelnik pastries and desserts! The famous Charles Bridge provided the backdrop for a relaxing evening after the explorations.

After two and a half weeks we can now observe a constant in our conversations. Despite problematic situations, many young people are optimistic! Particularly in Prague, where the current government is not very pro-European, many student movements have kept a positive attitude towards the EU.