Media
Start / Media / Nine countries, six weeks, one question: How well do young Europeans feel represented in and by the EU?

Nine countries, six weeks, one question: How well do young Europeans feel represented in and by the EU?

Hanover, 1 August 2019. How well do young people feel represented in and by the EU? Do they feel their voice is heard? Bosse Spohn and Onur Erden will enter into dialogue with young people on their tour through nine EU member states in order to find answers to these questions. Their journey will be facilitated by a travel grant funded by TUI Foundation. The two political science students will start their summer tour in Brussels on 7 August. They will travel on to Amsterdam, Stockholm, Warsaw, Prague, Rome, Naples, Athens and Marseille and finally to London, where the tour will end on 14 September.

In each of the cities visited on their tour, Bosse Spohn and Onur Erden will engage in direct talks with young people and listen to their stories. They will share their encounters and experiences on the website (www.tui-stiftung.de) and on TUI Foundation’s Instagram account (www.instagram.com/tuistiftung). They are also planning to prepare a final report summarizing and evaluating their experiences.

“Through the #engageEUrope2019 summer tour, we will enter into dialogue with our peers – in the hostel, in the street, or in the bar in the evening. I am looking forward to this direct exchange, as it will enable us to sound out public opinion among young Europeans, immediately after the European elections and the election of Ursula von der Leyen as new President of the EU Commission,“ says Bosse Spohn. He is a political science and history student in his seventh semester at Göttingen University and has already taken part in an Erasmus+ scheme at the University of Roskilde (Denmark). Onur Erden is a British political science student at Queen Mary University in London. The two students met in the framework of a project run by Schwarzkopf Foundation Young Europe. “We will listen very carefully and ask questions – in order to understand how well young people feel represented and what they think about Europe. Enthusiasm for Europe remains relatively high among young people. The tour will therefore also offer us insights into ways to overcome the Euroscepticism displayed by older generations and highlight what Europe and its politicians can learn from us, the young generation,” explains Onur Erden, outlining the goal of the summer tour.

Elke Hlawatschek, Managing Director TUI Foundation, says: “In May 2019, TUI Foundation published its third European Youth Study ‘Young Europe’. The results have shown that young people support the European idea, but are certainly also being critical. Onur and Bosse will now have the opportunity to carry out a reality check of the results of the study on the ground. This will unveil the personal stories behind the numbers and the individual motives behind the statistics. We are therefore very excited and look forward to the social media coverage and the final report.“

This is the itinerary of the #engageEUrope2019 summer tour:

If you like to meet Bosse and Onur on their tour, get in touch with them by e-mail youngeuropesummertour@gmail.com or via the Instagram account of TUI Stiftung. 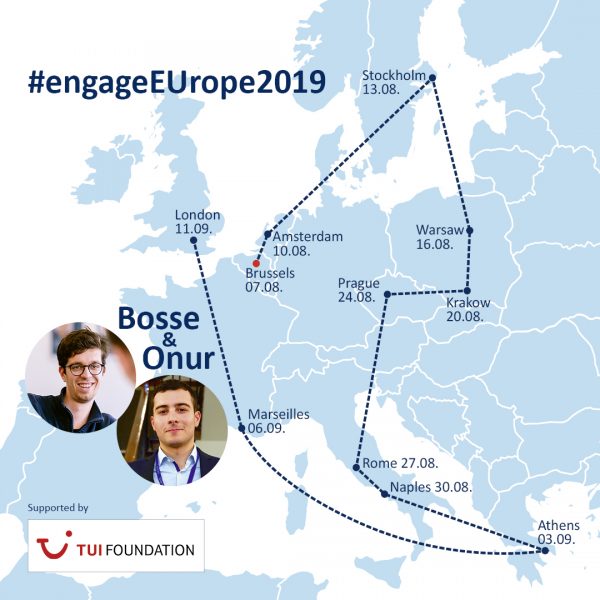 Nine countries, six weeks, one question: How well do young Europeans feel represented in and by the EU?
to project
We use cookies, in particular to track your browser behaviour on our website. You can change your cookie settings whenever you want to and refuse the acceptance of cookies. Unless you change them and continue using this website, we will assume you are happy to receive all cookies on our website. For more information about our cookies and how you can change your cookie settings, please refer to our Privacy Policy.
OK