Media
Start / Media / Nine countries, six weeks, one question: What is the view of young Greeks on the EU?

Nine countries, six weeks, one question: What is the view of young Greeks on the EU?

Athens, 6 September 2019. How well do young people feel represented in and by the EU? Do they feel their voice is heard? Bosse Spohn and Onur Erden are in dialogue with young people on their tour through nine EU member states in order to find answers to these questions. Their journey will be facilitated by a travel grant funded by the TUI Foundation. The two political science students started their summer tour in Brussels on 7 August. They have been to many European cities including Amsterdam, Stockholm, Warsaw, Prague, Rome, Naples. Now they are in Athens engaging in direct talks with young people and listen to their stories.

As part of this initiative, they met today with a group of young Greek employees at the offices of TUI in Athens. The two students and the young Greeks discussed about how they feel represented by the political system, what they think about the EU and what works well or what should be improved. They also discussed about ideas on possible reforms of the EU-system, in order to ensure that the voice of young Europeans will be heard.

The recent study of the TUI Foundation “Young Europe 2019” found that a majority of young people are positive towards the European integration and are well aware of the benefits of their country´s membership in the EU. In Greece, the attitude towards the European unification process is positive, too, and has continuously increased in the last years. A clear majority of 66 per cent of young Greeks believe that their country should stay in the EU. In addition, young Greeks have the highest score in regarding themselves not only as citizens of their own country, but also as European Citizens (73 per cent). Moreover, young Greeks have the highest score among Europeans who believe Democracy to be the best form of government (73 per cent). Yet, the data also shows that young Greeks feel a certain lack of representation. Also, a majority of Greeks, as much as Southern Europeans in general, believe that their generation will not be better off than the generation of their parents. 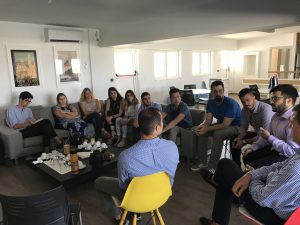 Bosse Spohn says: “Through the #engageEUrope2019 summer tour, we enter into dialogue with our peers – in the hostel, in the street, or in the bar in the evening. This enables us to sound out public opinion among young European. Despite the fact that young Greeks seem to have a feeling of disappointment in governmental authorities, we see that young Greeks have an optimistic perspective on the future of the EU. We discovered a proactive youth who are eager to achieve progress on a European scale.

Onur Erden explains: “We are listening very carefully and ask questions in order to understand how well young people feel represented and what they think about Europe. Enthusiasm for Europe remains relatively high among young people. In Greece we saw an optimism for a better future associated with the EU amongst young people, albeit overshadowed by disbelief with regards to the handling of the financial crisis. Greece is symbolic for the claims of the European South. The voices of young Greeks are a key factor for the future of European integration. An integrated European South is necessary for the protection of the European idea.” explains Onur Erden.

This is the itinerary of the #engageEUrope2019 summer tour: