The first step in any integration process is to learn the language. Most refugees arriving in Germany have little or no knowledge of the German language. That’s why the TUI Foundation and Deutschlandstiftung Integration initiated the “I speak German.” project. It has two components. Firstly, the two foundations organise language courses where volunteers teach basic German to refugees. Secondly, they provide the free teaching book, “I speak German.”.

30,000 copies have been distributed to more than 1700 recipients since the project began. Ten successful language courses have been held in Hanover, as planned, since December 2015, with a total of around 120 refugees being taught by 30 TUI volunteers.
Doris Schröder-Köpf is the Regional Commissioner for Migration and Social Inclusion and project patron. She paid a visit to Hanover today to find out how the initiative is getting on and talked to some of the course participants and volunteers.

“I speak German.” is a fantastic project that supports language teaching volunteers. It also provides course participants with key basic skills that will help them to settle in to their new lives in Germany. I’m glad that the model project in Hanover has got off to such a successful start. Companies and foundations throughout Germany are getting involved in refugee aid projects. That’s a very positive development and I’m absolutely delighted about it.” 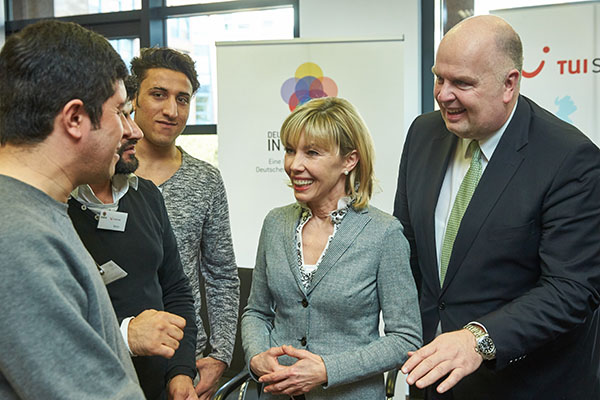 The project was presented by Thomas Ellerbeck, member of the Group Executive Committee at the TUI Group and Chairman of the TUI Foundation’s Board of Trustees, and Ferry Pausch, Managing Director of Deutschlandstiftung Integration.

Feedback about the courses has been very positive, both from the volunteers and from the refugees. We believe that to integrate the refugees quickly, we have to roll up our sleeves and get down to work preparing them for their new lives in Germany. Language is the key to participation and effective integration. The volunteers have worked immensely hard. They are our most important project partners because the success of the courses is in their hands. Now we intend to use our experiences in Hanover to extend the project to other German cities. Deutschland Stiftung Integration and the TUI Foundation would love to hear from companies that are interested in implementing this model on their own premises with their own staff. The political community, the business sector and foundations could achieve far more by joining forces and addressing the problem together.

The TUI Group supports its employees ‘engagement in TUI Foundation projects with a flexitime working policy. Ferry Pausch of Deutschlandstiftung Integration pointed out,” In the current situation, when a great many people are wondering what the best way to implement the integration process is, the “I speak German.” initiative builds an important bridge between the volunteers and the refugees.” The TUI Foundation and Deutschlandstiftung Integration hope to extend the project to other German cities. The second course location will be Osnabrück. Other cities can apply to become “I speak German.” partners.

"I speak German." in the representation of Lower Saxony in Berlin

I speak German has successfully started

“I speak German.”: A successful project for refugees with Doris Schröder-Köpf as patron, 03.03.2016