The Scandinavian emphasis on environmental sustainability was immediately clear to us upon our arrival to Sweden. Lying in the heart of every Swede is a deep respect for nature. This is born of an unspoiled natural landscape surrounding Stockholm and an urban population of just over a million. We were impressed to learn that Stockholm’s main Central Station utilises the body heat generated by its nearly 250,000 daily commuters to provide sustainable heating for nearby offices! Onur, having been raised in London, is always startled by just how quiet other European capitals can be, compared to his home city which stands as one of the busiest in the world.

Besides a quick glimpse of the Swedish countryside, we enjoyed Stockholm’s culture festival. Since 2006, the Stockholm culture festival caters music to all tastes and genres. We heard the Royal Military Orchestra and saw an exhibition of our planetary system all whilst strolling through the festival area. While we explored the Swedish culture, we also had to try some traditional Swedish food. The Swedish meatballs, better known as Köttbular, are an all-time favourite and even better with mashed potatoes. Just by walking through the city you can understand why Sweden is such a wealthy country, but our interviews gave us further insight into what Swedish society more generally thinks about the EU.

Although our time in Stockholm was short, our itinerary was packed with activities. We chose to reside outside the city centre, near Husby, an outer suburb with a large migrant population. The harsher realities of integration were revealed to us here, an occurrence we also found in Brussels. One of the big talking points in our discussions is integration and representation of migrants and ethnic minorities. The young people we met were of the opinion that this is difficult to achieve when underrepresented communities are clustered together. We also found this to be an unfortunate structure because it hinders the integration opportunities of those new to European society. Sandra, a native Swede, expressed her concern that the ethnic minority ‘label’ is still very much imposed and felt amongst the country. This is parallel to the ‘take back control’ sentiment that was evident in much of the recent European election campaigns across Sweden. This was explained to us by Chris, a Strategy Manager at TUI with an interest in politics.

The Swedish mainstream media attitude is not too EU friendly, the young Swedes we met were consistently more optimistic towards European and feminist ideals. The economic and security benefits offered by the EU are acknowledged as well as the freedom of movement which is held very highly amongst young people. This compliments the deeply rooted desire for environmental sustainability evident in Swedish culture. 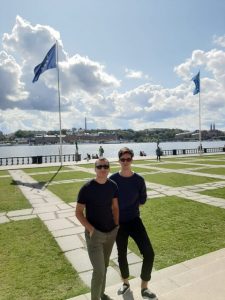