Media
Start / Our projects / Young Europe: A New Future? / London to sum it up

Our last stop was London, the capital of the country that is going to leave the European Union. Indeed, the journey was afflicted with symbolism to start in the European capital, Brussels, and to end in the soon-to-be non-EU city of London. Onur grew up in London and we had no problem finding our way around the city. A different experience from our previous stops where we had to orientate ourselves first.

Once we arrived, we felt the exertion of our five weeks of travelling. However being in London we couldn’t help but feel energized by the city. The diversity of different dishes, the variety of accents and the multiple backgrounds of the people were a great finish for our tour. Since the topics migration and representation of minorities were a constant companion during our journey experiencing this multicultural melting pot as a finisher was just incredible. So, London was a great embodiment for us to see how immigration worked.

We explored lovely parks around London, enjoyed some fish and chips and didn’t worry about politics too much. But any newsstand we passed we were confronted with the UKs number one topic: Brexit. It is hanging over the UK like the sword of Damocles. The news were and still are dominated by it and the uncertainty is felt in discussions with Londoners. Shortly before, we arrived in London the Prime Minister Boris Johnson sent the House of Commons into a forced break to realise his plans of a hard Brexit.

We met up with some old UK friends in London to discuss the events. All our interviewees were annoyed, disappointed and upset about what is going on. The path forward is unclear, but there are multiple possibilities: a new general election, a snap election, a second referendum, a hard or soft Brexit. One thing however is crystal clear: the British youth will suffer the most from any one of the outcomes. 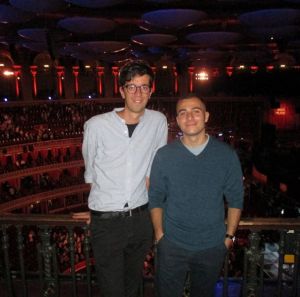 Besides the politics, we enjoyed our last days and recaptured the highlights of our trip. We rounded up, the uncountable experiences we had with a classical concert in the famous Royal Albert Hall and some original Italian Pizza. To sum up, after five weeks of travelling through Europe, we feel highly grateful for all the experiences and the new perspective on the EU.